Pygmalion is a historical play that follows the main character Eliza. She starts off as a common flower girl with a poor English accent, that is, until she meets Professor Higgins and Colonel Pickering. The two scientists then teach Eliza how to speak »proper English«. The scientists succeed in their experiment, but during that time they also take away the girl’s independence. The play ends with Eliza realising her self-worth and regaining her independence. Overall, the play was quite good. The only thing I didn’t like was the annoying screaming of the main character and the immature audience from some schools.

I loved the play. In the beginning some students clapped at everything the manager of the group said in his introduction, and that was the only thing I didn’t like. I liked the way some actors talked. It was very interesting, because it was different than normal English. I think this play was even better than the one we went to see last year. I’d like to see more plays like this one.

I must say that I really enjoyed the play. It was very interesting. It’s a pity that it did not last longer. The play has a very deep meaning – you have to love and respect yourself no matter what. I would recommend this play to all schools because of its historical theme and setting. My favourite thing about Pygmalion is the way Eliza managed to stand up to Professor Higgins.

I really liked the play. It was a pity, however, that some people in the audience weren’t mature enough to be in a theatre. At the beginning they clapped at every single sentence of the manager during his introduction, thus delaying the start of the play itself. Overall, the play was interesting and I enjoyed watching it, despite the unfortunate event at the beginning. I’d love to go to other plays as well.

At quarter to nine on Wednesday we went to the theatre (KD Krško). The whole performance was very interesting. It lasted for almost two hours. I really enjoyed watching the actors and actresses. My favourite character was the drunk dad who “sold” his daughter to Professor Higgins for five pounds. I couldn’t understand what Eliza was saying sometimes, because she spoke in the Cockney dialect. I think the play we watched last year was better than this one.

On Wednesday, 19 December, we went to KD Krško to see Pygmalion, an English play performed by the American Drama Group. The story is about a common flower girl Eliza, who is once seen by Professor Higgins selling flowers in front of a theatre. After a bet with Colonel Pickering he decides to teach her how to speak “proper English”. I liked the play, because it was very funny at moments. I also liked the fact that Eliza became independent at the end and left Professor Higgins. I didn’t like the way she was treated by Professor Higgins – like and experimental object. But it was really interesting to see a performance in a different language and I enjoyed the experience. 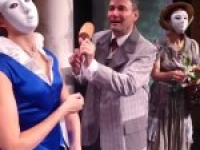 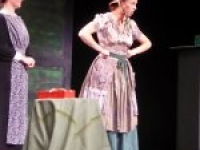 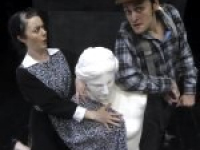